(Prices include custom clearance, import duties and/or VAT worldwide. Worldwide shipping is free for orders over $1000)

Eiderdown is the best of the best when it comes to down and annual supply is limited.

As the raw material can only be gathered once a year, once the eider ducks and ducklings have left their nests, production cannot be increased.

We rely on natural supply each year – nature decides.

This down expands when warmed up by your body. No other material in nature can match its insulating abilities. The cling of eiderdown is also unparalleled.

Although very warm, it breathes spectacularly well and is therefore great for light summer duvets. It’s the most durable down there is. A Norwegian treasure that can last 100 years and be passed down through generations if properly maintained.

Available in Summer, All-year, Winter and Polar and therefore suitable for all climates of and all possible personal preferences. Can also be tailor-made to suit individual tastes. Each duvet is made to order with a three week lead time.

We recommend to ship the duvet back to us every ten years for complete restoration. Eiderdown is the most durable down there is and these duvets can be restored up to eight times without the quality decreasing – thereby lasting almost 100 years if maintained properly. The restoration cost is the retail price at time of restoration, divided by eight. Shipping back and forth is extra, but thanks to a generous discount with our courier, costs are modest. We will gladly help arrange your product’s return to make the process as effortless as possible for you.

The story behind our exclusive Eiderdown

The Norwegian island of Svalbard

Norvegr sources its Eiderdown from the Norwegian island of Svalbard, where the Eider ducks are cared for by the locals and co-exist with the infamous Polar Bear.

The annual quantity is less than 100 kilograms and is arguably the most exclusive down in the world!

The eider ducks, ”Somateria Mollissima Borealis”, that inhabit the island are slightly different than the eider ducks on the Norwegian mainland.

Even during the summer there is often rain, sleet and ice cold winds in these polar areas. This means that the wild animals on Svalbard, such as the fox and the reindeer are smaller, and develop thicker and richer furs because of the harsh climate. This is also the case for the eider duck, and its protective down.

Lastly, unlike on the Norwegian mainland or in Iceland, the eider ducks on Svalbard are completely untouched by humans!

The Secret of the Eiderdown from this mesmerising island

Seldom is nature quite so sophisticated as the deceptively humble down of the highly prized eider duck of northern Norway.

There are many reasons why this material has been coveted for so long, but the eider keeps its secret, quite literally, close to its chest.

The down comes only from the female eider, who plucks it from her own breast to feather her nest. Whenever she needs to wander down to the sea to feed, she simply spreads a little down over her eggs. This is enough to keep them warm for the whole day – tribute enough to the unique insulating properties of this material.

This eiderdown has the best heat retention of all materials in nature!

The process behind collecting and washing this special Eiderdown material

After midsummer, the female and her ducklings leave the nest and head for the sea until next year - this is when the harvesting of the down can take place.

The down is hand collected and hand washed. It takes a highly skilled person a full week to clean a single kilogram of Eiderdown, which was taken from up to 60 nests. (Each nest yields approximately 15-20 grams of down.)

The hand cleaning process is an essential step to ensure the preservation of its unique qualities.

The annual quantity is sufficient for about 100 duvets and it is arguably the most exclusive down in the world. One rarely measures the fill power of eiderdown, however this has the highest of them all.

What other key features do these luxury duvets have?

Filled in a channel constructed duvet casing made from the finest batiste, 100 % Egyptian cotton. The seams are hidden inside the casing on three sides, and there is no stitching throughout.

Instead, we use baffle walls between the channels, to make sure that the down reaches everywhere inside the casing. This way, the duvet is equally as thick all the way through the channels, and you will not have any cold spots against your body. 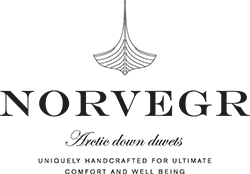 Down is naturally anti-allergenic

How Norvegr Duvets are Made

What Constitutes a good duvet?

How to choose a duvet collection

How to choose a duvet size

How to choose a duvet weight

How to choose a pillow

What constitutes a good pillow

We use cookies to ensure that we give you the best experience on our website. If you continue to use this site we will assume that you are happy with it.